WBT RAISES $16,713. FOR HONOR FLIGHTS. ALL HANDS ON DECK TURNS BACK THE HANDS OF TIME

IT’S A YANKEE DOODLE DANDY! HOLLYWOOD VICTORY TOUR 2015 STOP IN ELMSFORD WBT RAISES $16,713 FOR HONOR FLIGHT. ALL HANDS ON DECK TURNS BACK THE HANDS OF TIME 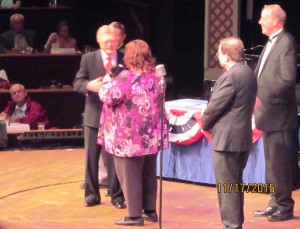 Bob Funking, Co-Owner of the Westchester Broadway Theatre in Elmsford prsents a check for $15,000 to Beth Vought, Co-Director of Hudson Valley Honor Flight, and Bill Skennion, Vice Chairman, (2nd from right), while Steve Calleran, WBT Host far right looks on. Mr. Funking also presented a check for $1,000 for Honor Flight to donate to Fisher House, a group that contributes and arranges family visits to veterans undergoing treat. An additional $713 was raised by an in-house 50-50 raffel where some 350 person bought $1,450 worth of raffle tickets.  Photo by WPCNR

WW II Vets see All Hands on Deck — Free– the show for veterans and Americans who love them!

November 17 was my father’s birthday, and my father was in the U.S. Coast Guard in 1942 before I was born.

He was stationed in Charleston,S.C. and defending the coastline. His name was Charles Bailey. He grew up in Pleasantville, New York, USA. Tended soda fountain at Baldwin’s Pharmacy, and wanted to be a soda jerk. He never went to college. He and my mother adopted me. He played trombone in the Pleasantville High School Military Band. He served.

When the intrepid troup of the Hollywood Victory Tour broke into the Coast Guard Anthem at the close of ALL HANDS ON DECK, and Coast Guard Veterans, including two women, stood—I felt like standing up! 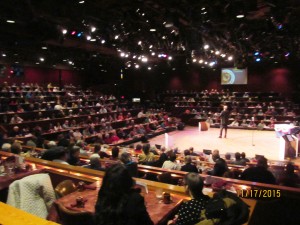 So did the over 350  in the audience last night which included 50 WWII veterans invited free as a salute in the Westchester Broadway Theatre sixth annual Honor Flight fund-raising event. 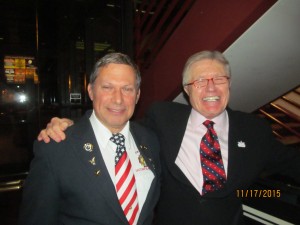 Bob Foster, left,Chairman of the Eastchester Chapter of the Veterans of Foreign Wars (Mr. Foster served in the Vietnam War) organized the ALL HANDS ON DECK event, hosted by Westchester Broadway Theatre. Bob Funking, right WBT Impressario and Co-Owner with Bill Stutler, selected the ALL HANDS ON DECK SHOW. The two have gotten together on 6 straight fundraisers at WBT, Tuesday night was the most successful the WBT has put on. raising  double the amount from last year. Photo by WPCNR

The matinee performance yesterday sold out. Both performances raised $16,713, the highest sum raised to date, by far.

ALL HANDS ON DECK is the best little musical no one knows about— written, directed, and choreographed  and arranged by Jody Madaras, performing 42 songs from the heart of the World War II entertainment  era who had this “idea for a musical” based on his childhood in Ohio, the son of a patriotic family. His grandfather immigrated to Ellis Island in 1911 and served as a naval officer in World War II

Mr. Madaras is a Broadway Star: Finian’s Rainbow with Lauren Bacall, The I Love Lucy Live On Stage first national tour, and Irving Berlin’s I Love a Piano – Japan Tour, and on television, As the World Turns – but he had this idea…and turned it into a musical of his own.

According to the All Hands on Deck website, Madaras says “We are reminded everyday our country has challenges. I wanted to write about patriotic unity, what’s right about our country, and thank our veterans in a musical way. I know how much these songs mean to them. I wanted audiences to leave feeling a little better and happier about our country.”

He had no idea it would be such a hit nationwide when he premiered it in Perryville, Ohio in 2011.

“It was a complete surprise that so many people came to the show in Perrysburg. I had a simple idea worth trying, and the audience’s response was overwhelming.”

The audience was overwhelmed last night in Elmsford, just as they were in Perryville.

ALL HANDS, in the last two weeks  has just performed in Kalamazoo,MI, Toledo, Bransom,MO, Jacksonville, Morgantown, NC, and Sarasota. When the “mythical” Hollywood Victory Tour Train arrived in Elmsford last night memories were stirred, old romances kindled, the love of a different America in a different time, enthralled and set today’s hearts beating again to perhaps the greatest, most emotional songs of all time.

Madaras on his website, says “When I got the idea to do the show, one of the things I found was no one had ever done a show based on the Caravan. It was a huge part of the war effort and no one had ever fully honored them.” 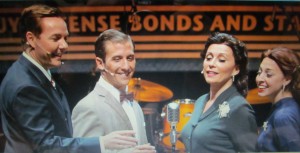 ALL HANDS ON DECK honors more than just the caravan. It honors the human sacrifices of the heart, the loneliness on the home front, the longing, the worry, and all Americans working as a team when they had to to win a two-front world war, producing military ordinance, planes, tanks, trucks, ships basically from a start-up position.

After the newsreel puts the audience right into the mindset of the nation in 1942, Jody Madaras playing Ted Crosley (the name he created for a very Bob Hope-like emcee with all “old ski nose” and Fred Astaire  trademark steps and moves) breaks into the show theme “I’ve Heard that Song Before.” He greets “ Good evening, Elms FORD, New York” deliberately mispronouuncing , bringing laughs.

He introduces the sultry Betty Blake (played by seething Valerie Hill. They are joined by another old smoothie,  John Hanley (Carter Lynch, Gaston in the Broadway Tour of Beauty and the Beast) and the “Bond Bombshell,”  Daisy Maxwell (Emily Peterson).

They get you into the rhythm immediately  with the famous “train songs” of the forties: Chattanooga Choo Choo,  The Atchison, Topeka & Santa Fe, and Sentimental Journey—impeccably backed with the Victory Tour Orchestra behind trademark bandstands – creating the lost lovely music of that era when train travel moved recruits, soldiers and brought them back home to families who waited and longed for  their guys and gals.

The second half recreates a radio show  aired every week from Hollywood, transcribed and sent around the world. The group directs the audience with hand signals when to applaud and when to applaud loud. The radio hour really moves and with the audience enthusiastically responding on cue, and complete with Maxwell House Coffee commercials and Mercury automobile commercials…delivered live by these Broadway pros.

Highlights are the many love songs of the era: where the baby-talking muted trumpet, the mellow  trombone of Tommy Dorsey are brought back by the fabulous onstage orchestra. This just filled the house with music you could tap your feet to, dream of an old romance, and remember just how it made you feel. Mr. Mandaras as Ted Crosley and Ms. Peterson as Daisy do a long intricate tap dance that they improvise as crowd keeps applauding — and you’d swear they were Fred (Astaire) and Ginger (Rogers). 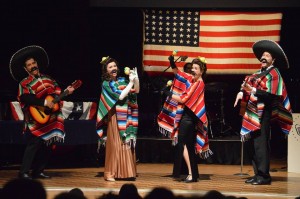 The Victory Radio Show–performing South of the Border. Photo, ALL HANDS ON DECK website.

The ode to those strange places were recruits trained…Texas, California, and other sandy dusty places are laughingly recalled with the great Don’t Fence Me In (by Mr. Mandaras, who sounds just like Der Bingle on this one), and the Priceless Quartet combines on  Deep In the Heart of Texas, and South of the Border

The Mailcall segment brings the ladies back to reprise The Andrews Sisters on Don’t Sit Under the Appletree. There is no lag-space—ALL HANDS is very tight.

The love songs are here: Embraceable You, I Can Dream Can’t I?, Long, Long Trail, and the two lovely ladies Ms. Hill and Ms. Peterson make them shimmer and strum the strings of memory, still sharp as ever in this audience. When Embraceable You was sung by Ms. Valerie Hill (Betty Blake), women in the audience started to sing the lyrics softly. It is one of the most touching sequences I have ever seen in theatre. The loving way these top-of-their-game entertainers treat the classics – straight with meaning and beauty brings the airwaves of the 40s right back.

Magic was turning back the hands of time and making them stand still for 2 hours. I and anyone who sees this show on their next stop will always remember, too.

ALL HANDS ON DECK is a postcard to what America was when it needed to stand up and step up together, and it never slows down.

The finale featuring stirring, brassy, get-up-out-of-your-seat-and-march themes of all the services is a great moment in show business. When they played The Caissons Go Rolling Along, about 40 army veterans stood up to applause and clapping and the vets moved to the march like old times. During Anchors Aweigh, former legislator Vito Pinto, Navy vet was standing waving his arms. Everyone loves this conclusion

Unfortunately, this was a one day stop for the Hands on Deck. They should make a stop here every year!

The All Hands on Deck  VICTORY TOUR “Imaginary Train” left Elmsford for the last two stops on the 2015 tour this weekend in Ogdensburg NY at the George Hall Auditorium Saturday and Sunday in Oneida at the Oneida Performing Arts Center. Go to www.allhandsondeckshow.com to learn more about the show and all the songs.

ALL HANDS ON DECK is “must-see musical,” when it comes to a town near you, easily the best original patriotic production since Yankee Doodle Dandy